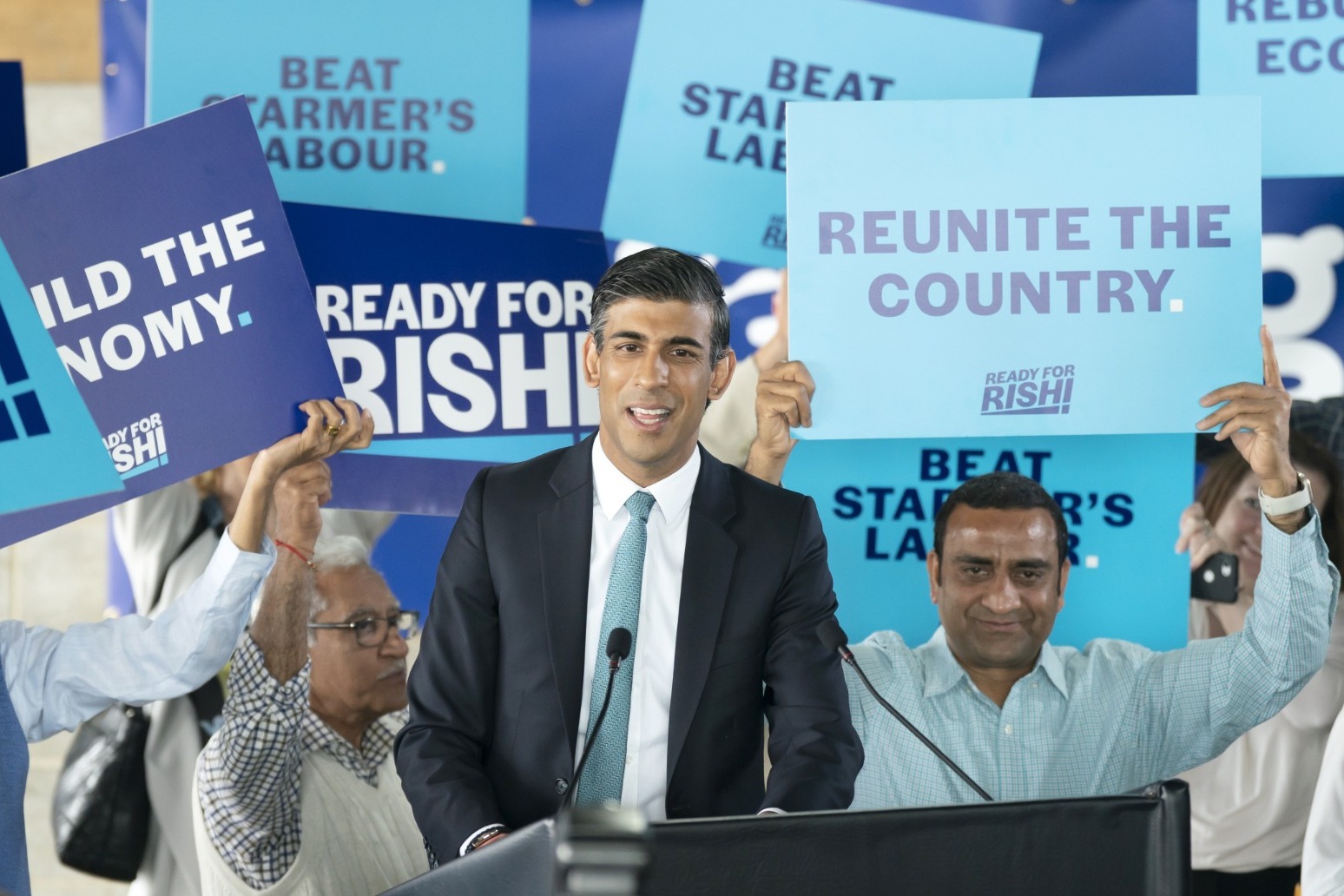 The former chancellor’s given a speech this morning in Grantham, Margaret Thatcher’s birthplace

Rishi Sunak hit out at the “forces that be” backing Tory leadership rival Liz Truss, as he positioned himself as the underdog in the race to replace Boris Johnson.

Mr Sunak used a speech in Grantham, the birthplace of Margaret Thatcher, to kick-start his campaign as he bids to win over Tory members.

Foreign Secretary Ms Truss, tipped as the favoured candidate among grassroots voters, on Saturday vowed to review all EU laws retained after Brexit by the end of next year in a “red tape bonfire” if she becomes prime minister, and to scrap or replace those that are deemed to hinder UK growth.

Ms Truss, a former Remainer turned ardent Brexiteer, is also the favoured candidate among the remaining Johnson loyalists in the party.

She said that if elected, she will set a “sunset” deadline for every piece of EU-derived business regulation and assess whether it stimulates domestic growth or investment by the end of 2023.

Industry experts would be tasked to create “better home-grown laws” to replace those that fail the test, if they are not ditched altogether.

Mr Sunak took aim at his rival’s Brexit credentials in his speech on Saturday morning, which was heavy on warnings about the dangers of inflation and the need for a new “radicalism” in government.

Speaking to a mostly friendly crowd, he called himself the “underdog” but stopped short of naming Ms Truss personally.

He told the crowd: “The forces that be want this to be a coronation for the other candidate. But I think members want a choice and they are prepared to listen.”

Pressed by reporters to be more specific, he said he was talking “generically”.

Elsewhere in his speech, Mr Sunak sought to create a clear dividing line between himself and Ms Truss as he implicitly criticised her proposed tax cuts, which she says will help decrease inflation.

“If we are to deliver on the promise of Brexit, then we’re going to need someone who actually understands Brexit, believes in Brexit, voted for Brexit,” he told the crowd, to cheers.

In a speech punctuated by frequent applause, he also said: “We have to tell the truth about the cost of living.

“Rising inflation is the enemy that makes everyone poorer and puts at risk your homes and your savings. And we have to tell the truth about tax.

“I will not put money back in your pocket knowing that rising inflation will only whip it straight back out.”

He called for the need for radicalism in politics, telling the crowd: “Real change is there, I swear it.”

That change includes a promised plan to tackle NHS backlogs, driven in part by a so-called “vaccines-style” taskforce.

Warning against “privatisation by the back door”, Mr Sunak announced plans to eliminate one-year NHS waiting times six months earlier than planned by September 2024, and to get overall numbers falling by next year.

It is a theme Mr Sunak focused on in an interview with The Times newspaper, where he said he would put the UK on a “crisis footing” from his first day as prime minister to deal with inflation and a host of other challenges.

“They’re challenges that are staring us in the face and a business-as-usual mentality isn’t going to cut it in dealing with them,” he said. “So from day one of being in office I’m going to put us on a crisis footing.”

The legacy and influence of Mrs Thatcher has overshadowed the Tory leadership campaign so far, with both candidates seemingly bidding to claim the mantle of the Tory grandee.

Mr Sunak, who was joined on his visit by daughters Krishna and Anushka, as well as wife Akshata Murthy, laughed when pressed on whether the choice of location was a coincidence, telling reporters he believes what he is proposing is “common sense Thatcherism”.

His speech appeared to go down well with those watching.

Ben Lavender, 18, from Grantham, said while he intended to vote for Mr Sunak, he thought the chances of victory were “50/50”.

He added: “He seemed very charismatic. I think watching the debate the other night he seems more charismatic than Liz Truss.”

Juliet Donoghue, a former member of Rushcliffe Borough Council said she thought he was “amazing”.

She added: “I was impressed with him. I think he’s got a background in health and I feel he’s a man of integrity.”

Deputy Prime Minister Dominic Raab, a supporter of Mr Sunak, said the former chancellor had set out a “credible” plan on the economy and on the NHS.

He did not rule out someone from the private sector taking charge of the taskforce to tackle the NHS backlog, telling BBC Radio 4’s Today programme: “I don’t think Rishi has set out who that would be.

“One thing we learned is that you can bring people in, either from across government where we’ve got excellent officials, or people with experience, and particularly the hybrid experience.”

Offering chief scientific adviser Sir Patrick Vallance as an example of someone with private and public sector experience, he said: “I think actually, capability matters more than whether you’re public or private sector in this particular context, in order to drive up outcomes for patients.”

Ms Truss is also on the campaign trail on Saturday, where she is expected to defended her economic vision.

A spokesperson for Ms Truss said: “Liz‘s plans for tax cuts will reward people for their hard work and effort, allowing them to keep more of their hard-earned money. You cannot tax your way to growth.

“We have the highest tax burden since the 1940s and as Prime Minister Liz will take immediate action to prioritise growth and cut taxes.”

Describing herself as an “insurgent” who wants to change things, she told the Telegraph newspaper of her vision of the UK as a “high growth, high productivity, powerhouse”.

On her plan to bring down inflation, she said: “I believe it is right that inflation will come down because inflation was caused by a global supply shock. But it was exacerbated by monetary policy. What I have said is in the future I’m going to look at the Bank of England’s mandate. It is set by the Treasury. It was last set by Gordon Brown in 1997.”

Pressed on her thinking on the Bank of England’s mandate, she added: “What I want to do is look at best practice from central banks around the world, look at their mandates, and make sure we have a tight enough focus on the money supply and on inflation.”

– Mr Sunak, who supports the current Government policy on Rwanda and asylum claims, told the Times he would announce his own plans to tackle illegal migration next week.

– Ms Truss described her reaction to getting through the ballot, overtaking rival Penny Mordaunt to do so. “I yelped with delight,” she told the Telegraph. “There was lots of hugging and back-slapping.”

Both candidates also revealed the effect of the campaign so far on their families and how it is impacting those closest to them.

“My oldest daughter’s working on the digital team,” Ms Truss told the Telegraph.

“She’s done a computing GCSE so she’s helping out on that. And my younger daughter was there as well, giving general political advice.”

Mr Sunak told the Times: “Family is core to who I am. I miss them a lot, they are in Yorkshire and I am here. We’re on video every day. But it’s not the same, but they’re used to that.” Holidaymakers and lorry drivers are set to face another day of hours of delays Liz Truss has called on France to act over “entirely avoidable” delays at the border as holidaymakers and lorry drivers face another day of gridlocked roads around Dover. Lengthy queues were building again on Saturday, following a day of bumper-to-bumper traffic on Friday. It is one of the busiest periods for foreign travel from the UK […]