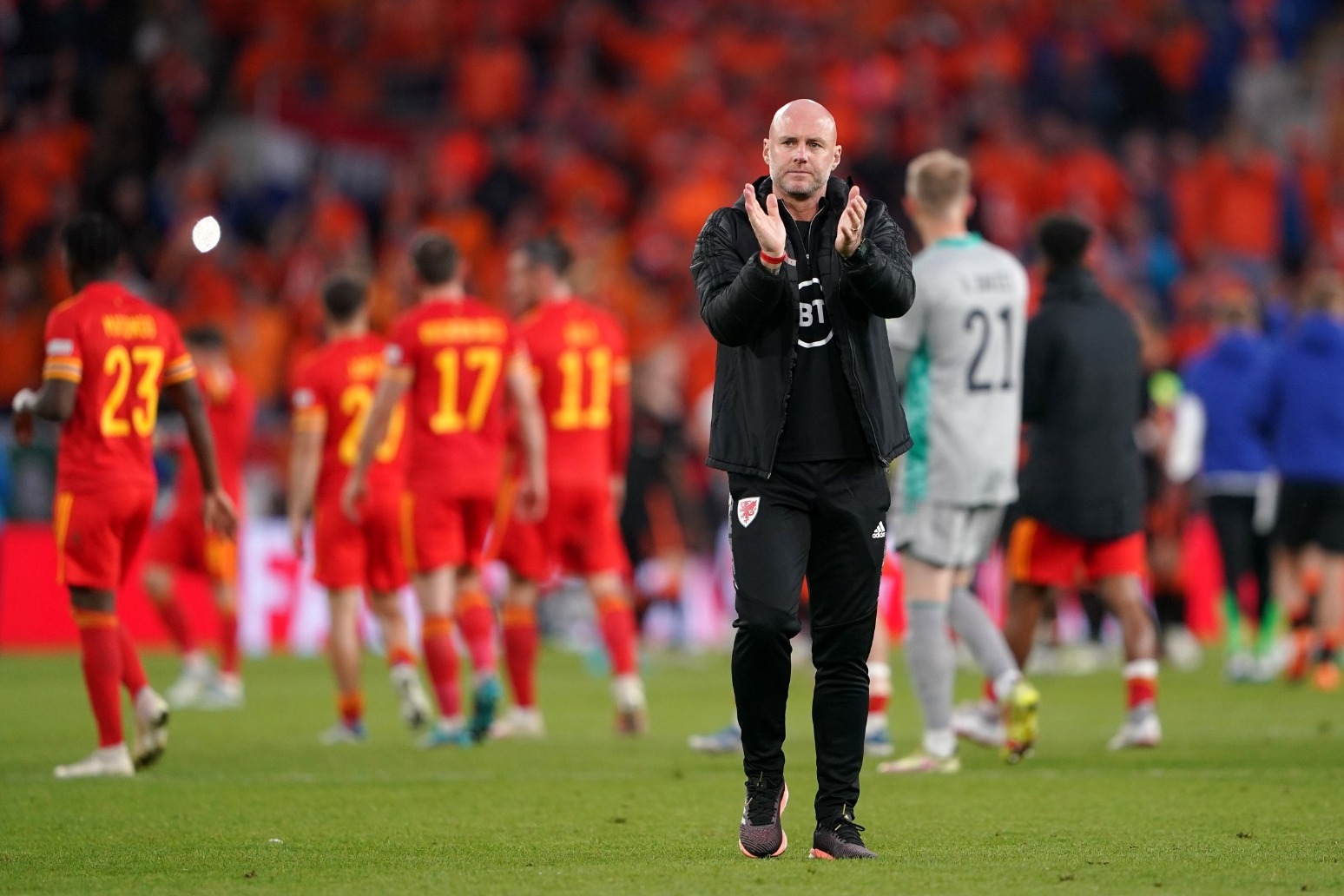 Rhys Norrington-Davies looked to have extended Wales’ unbeaten home record when he struck his first Wales goal in the second minute of stoppage time to cancel out Teun Koopmeiners’ opener.

But Holland went straight up the pitch and Weghorst’s superb header inflicted a first home defeat on Wales since November 2018, ending a run of 19 games unbeaten on Welsh soil.

Four days earlier Wales had qualified for their first World Cup for 64 years and this was definitely a case of after the Lord Mayor’s show with the intensity of the occasion often resembling a friendly more than a competitive fixture.

Both teams fielded shadow sides – in Holland’s case they made 11 changes from the side that had thumped Belgium 4-1 in their Nations League opener.

The Wales squad had celebrated reaching the finals in Qatar later this year at Gareth Bale’s Elevens bar in Cardiff city centre into the early hours of Monday morning.

Bale won his 104th cap after being sent on for the final 13 minutes, but Wales slid to a second Nations League defeat following last week’s setback in Poland.

Robert Page was taking charge of Wales for the 24th time – the same number as Ryan Giggs, who remains on special leave ahead of his August court case.

Page made four changes for Wales’ third of five games in the space of 14 days, with Ben Davies, Connor Roberts, Daniel James and Joe Rodon surviving from Sunday’s play-off final win over Ukraine. Davies wore the armband in Bale’s absence from the starting XI.

Holland’s new-look side was without a host of household names, including Liverpool defender Virgil Van Dijk who had been released from the camp to start his summer holiday early.

Louis van Gaal had presided over an unbeaten 10-game run – seven wins and three draws – since returning for a third spell in charge in September and confidence was clearly coursing through Dutch veins.

But it was an uncomfortable start for PSV Eindhoven defender Jordan Teze on his debut.

Teze picked up a third-minute caution for a cynical block on James and soon sent the ball out of play while under no pressure.

Holland failed to capitalise when Rodon was caught in possession and Koopmeiners’ shot was blocked.

Wales were content to defend in numbers and spring forward using the pace of James and Brennan Johnson.

James’ speed almost embarrassed Mark Flekken on two occasions as the goalkeeper dwelt on the ball too long.

Flekken punched away a Wilson free-kick and also safely gathered as James fired straight at him.

They were the only on-target efforts of a first half in which Holland enjoyed 62 per cent possession but could not deliver the telling pass to test Danny Ward in the Wales goal.

Davies, as he had done against Ukraine, denied Koopmeiners with a superb last-ditch tackle and Chris Mepham also defended smartly on the stroke of half-time to deny Cody Gakpo.

Holland started the second half with more intent and Koopmeiners, having planted a free-kick just wide, drilled a low shot past substitute goalkeeper Adam Davies.

It was Holland’s first on-target attempt and Wales were kept at arm’s length until Norrington-Davies climbed superbly at the far post to send a thunderous header past Flekken.

But Welsh joy was instantly curtailed when Burnley striker Weghorst scored with a powerful header to stretch Holland’s 100 per cent record in this fixture to nine games. Everton owner Farhad Moshiri has apologised to fans for mistakes made at the club which saw them threatened with relegation until the penultimate match of the season. A come-from-behind 3-2 victory over Crystal Palace three days before the end of the campaign extended the Toffees’ top-flight spell to 69 years, sparking joyous scenes with thousands of fans spilling onto the pitch. But on the whole it was a miserable year […]