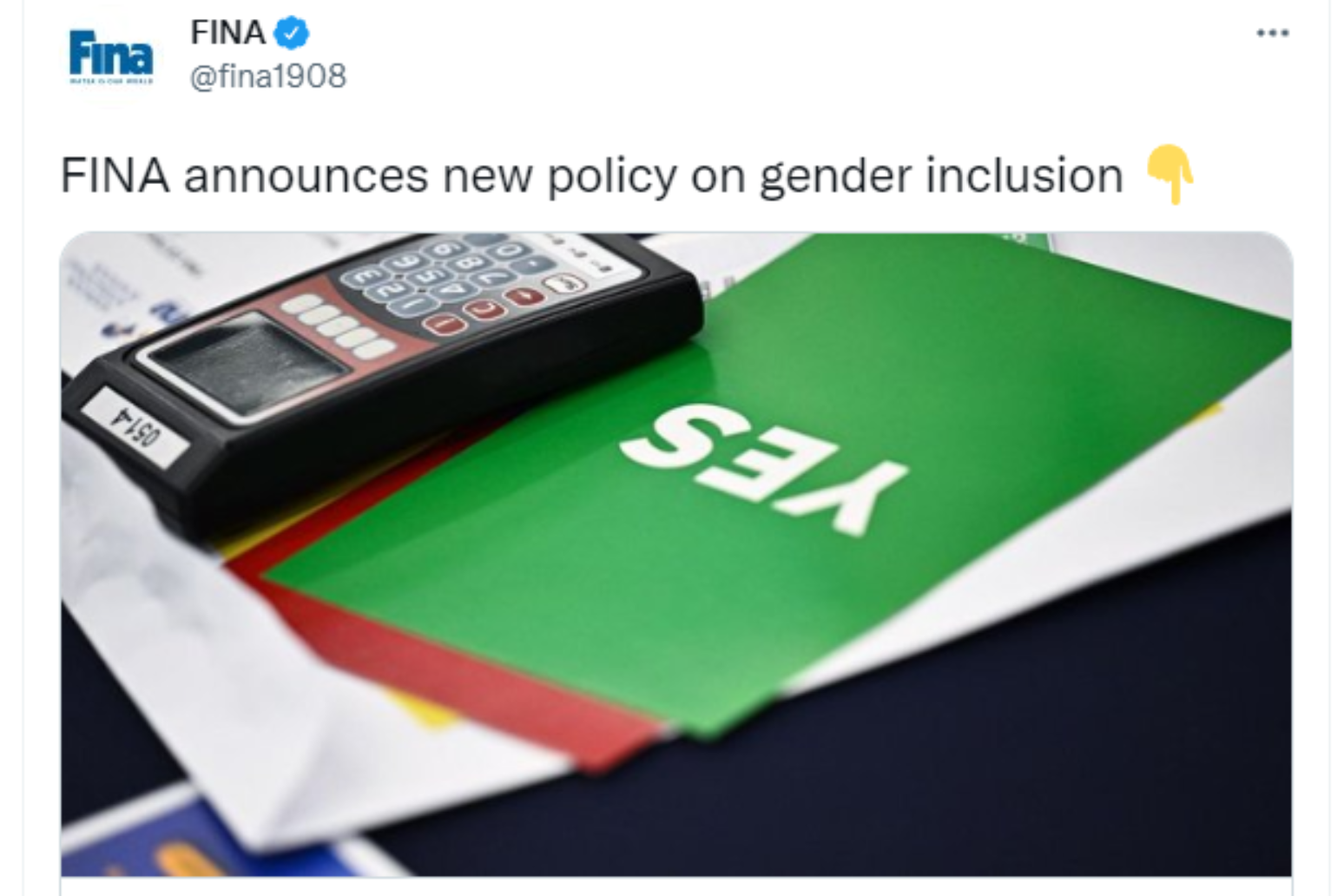 Swimming’s world governing body FINA has voted to ban athletes who have gone through male puberty from racing in women’s events.

In addition, FINA will set up a working group with a view to establishing an open competition category, open to athletes “without regard to their sex, their legal gender, or their gender identity”.

The sport’s new gender inclusion policy was passed by more than 70 per cent of member federations at an extraordinary congress during the ongoing World Championships in Budapest.

FINA president Husain Al-Musallam said: “We have to protect the rights of our athletes to compete, but we also have to protect competitive fairness at our events, especially the women’s category at FINA competitions.”

FINA’s 34-page policy document clarifies that male-to-female transgender athletes are still eligible to compete in the women’s category “provided they have not experienced any part of male puberty beyond Tanner Stage 2 [which marks the start of physical development], or before age 12, whichever is later”.

The move means Lia Thomas, who in March became the first transgender swimmer to win a major US national college title, will be ineligible to compete in the women’s category with immediate effect.

FINA’s announcement comes two weeks after cycling’s governing body, the UCI, voted to double the period of time before a rider transitioning from male to female can compete.

FINA also clarified that female-to-male transgender athletes will be eligible to compete in male categories, but in the sports of high diving and water polo they will be required to submit an ‘assumption of risk’ form, and are advised to seek advice on their physical capability.

Al-Musallam added: “FINA will always welcome every athlete. The creation of an open category will mean that everybody has the opportunity to compete at an elite level.

“This has not been done before, so FINA will need to lead the way. I want all athletes to feel included in being able to develop ideas during this process.”

Over 300 US and Olympic swimmers signed a letter in support of Thomas in March, but other athletes and organisations have expressed concerns about what they see as the physical advances of transgender athletes competing in women’s events.

FINA confirmed that the policy will come into effect on Monday, and said it will immediately start work on establishing events in its newly-initiated ‘open’ category.

It said in a statement: “Athletes who do not meet the applicable criteria for the men’s category or the women’s category may compete in any open events that FINA may develop in the future.

“FINA will begin work following the final promulgation of this Policy to determine the feasibility of establishing an open category in Aquatics sport disciplines, in which an athlete who meets the eligibility criteria for that event would be able to compete without regard to their sex, their legal gender, or their gender identity.” England fell to a third successive defeat as the Barbarians overcame a first-half red card shown to Will Skelton to win 52-21 at Twickenham, their biggest victory in the fixture. Skelton became the first player sent off in Barbarians history when his shoulder to the head of Patrick Schickerling ended the Exeter prop’s afternoon because of a failed head injury assessment. Forced to play 43 minutes with only 14 men, […]