What were the COVID rules on day of No 10 party – and how many cases were there?

The UK had been in lockdown for 58 days when Downing Street staff allegedly gathered for “socially distanced drinks” in the Number 10 garden on 20 May 2020.

On that day Boris Johnson’s principal private secretary Martin Reynolds invited more than 100 government employees to “make the most of the lovely weather” and “bring your own booze”.

Around 40 are thought to have attended the event, when people across the country were banned from meeting any more than one person they didn’t live with outside.

Here Sky News looks back at what the coronavirus situation was at that time.

Only 2.9 million COVID tests had been carried out at that point, due to a lack of supply, so the real case numbers were much higher.

On the day of the alleged Downing Street gathering, a further 363 COVID-related deaths were announced, bringing the total to 357,704.

A total of 9,953 people were in hospital with the virus that week – with 14% of mechanical ventilator beds taken.

No vaccines had passed safety tests and there were no dedicated antiviral treatments available for COVID.

What were the rules?

On 20 May 2020, the UK was two months into the first national lockdown, imposed by the prime minister on 23 March.

Strict ‘stay at home’ guidance, which saw people only allowed to go out for food, medical supplies and daily exercise, had been eased just seven days before on 13 May.

But people were only allowed to meet one other person from outside their household, as long as it was an outdoor public place and two-metre social distancing was maintained.

Friends and family were not allowed to go into one another’s homes or gardens and COVID ‘support bubbles’ for single parents and those who lived alone had not been introduced.

Social distancing meant couples and relatives who lived apart were not allowed to hug each other.

Non-essential shops, pubs, restaurants, cafes and libraries remained shut and did not reopen until 15 June and 4 July respectively.

Parents were still having to juggle work with teaching their children at home, as schools remained shut, with only a phased return of some primary schools on 1 June.

What was the government saying?

Just an hour before the alleged Downing Street “bring your own booze” gathering at 6pm, Culture Secretary Oliver Dowden held the daily coronavirus news briefing from inside Number 10.

He was joined by medical director for NHS England, Stephen Powis. 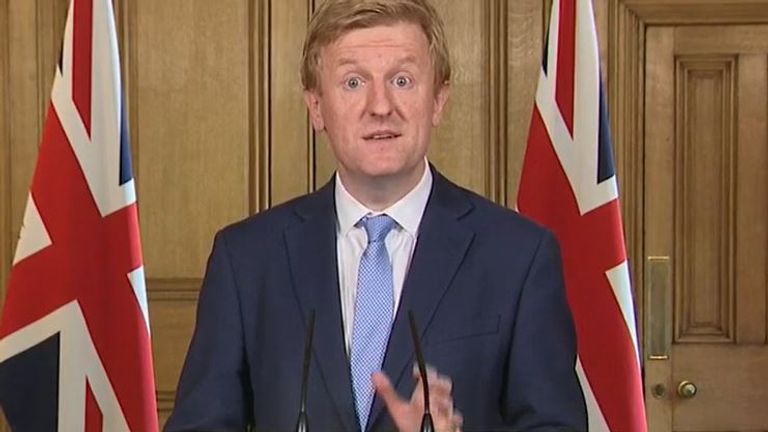 Oliver Dowden says ‘you can meet one person outside your household in an outdoor public place, provided you stay two metres apart’

That week the government had changed its messaging on COVID from ‘stay at home, protect the NHS, save lives’ to ‘stay alert, control the virus, save lives’.

There was widespread criticism over the ambiguity of the phrase ‘stay alert’, but the government insisted it correlated with its new COVID alert level system introduced that week.

On 20 May, England was at alert level four, which meant virus transmission was “high or rising exponentially”.

But Mr Dowden said that day: “Thanks to the hard work and sacrifices of the British people in this lockdown, we have helped to bring the R level down and we are now in a position to begin moving to level three, in careful steps.”

Boris Johnson had already announced in the days prior that people who could not work from home would be able to “speak to their employer about going back to work”.

And essential exercise was no longer limited to once a day, meaning “you can now spend time outdoors and exercise as often as you like”.

While previously people had not been allowed to sit in parks – as they had to be exercising – people were now entitled to socialise with one other person outside.

Mr Dowden urged: “If everyone stays alert and follows the rules, we can control coronavirus and reduce the number of infections.

“This is how we can continue to save lives, and livelihoods, as we begin as a nation to recover from coronavirus.”

What happened to people who broke the rules?

Warm weather and the easing of the ‘stay at home’ guidance saw people flock to beaches and beauty spots across the country that week.

Councils in Brighton, Bournemouth, Devon and Cornwall urged people not to crowd beaches and only travel with members of their own household – or one other person.

Police were still issuing coronavirus fines, which started at £200 and doubled for every repeat offence.

Between 27 March and 11 May, 14,244 fines for lockdown breaches were issued across England and Wales, according to the National Police Chiefs’ Council.

One incident from the spring of 2020 saw four people fined a total of £2,280 for drinking and having a barbecue in a park in west London.

The police officer who caught them told a later court hearing: “I saw three males and one female sat on a pallet wood.

“They were sat facing each other and there was a disposable BBQ on the ground near them. There were several carrier bags filled with empty cans of beer.

“I explained that all four were together in the park drinking beers going to have a BBQ so all four were going to get tickets for breaching the coronavirus legislation.”

We don’t have to imagine what would have happened if anyone else had organised a party of 100 people on the same day as the Downing Street BYOB party.

Here’s what happened in Handsworth: https://t.co/cGGmzcwlxx

It’s one rule for them and another rule for everyone else.

In the Handsworth area of Birmingham on 22 May, 100 people were dispersed by police after they broke up their street party.

Four days before the alleged Downing Street gathering, on 16 May, Jeremy Corbyn’s brother Piers was among 19 people arrested for breaching social distancing rules at an anti-lockdown demonstration in Hyde Park.

Around that time lawyers and civil liberties campaigners called for more than 14,000 COVID fines to be reviewed after police bosses admitted that several people had been wrongly charged under the emergency legislation.

There was also outrage that day following allegations published by the Daily Mirror that the PM’s senior adviser Dominic Cummings had made a 260-mile round trip from London to Durham in the middle of lockdown.

What were people doing to protect others?

The official guidance at the time instructed people to stay at home “as much as possible”, work from home “if you can” and “limit contact with other people”.

Since ITV News published the leaked email invite for the Downing Street drinks, people have posted images of the sacrifices they made to keep loved ones safe in May 2020.

One image shows a child wearing full PPE hugging a grandparent through a transparent plastic sheet, while many others feature elderly relatives being talked to through windows.

May 2020. 9 weeks away from home. Trying to save lives. And they partied??I baked in these suits. I wept. I was isolated. We rationed PPE. We watched people die. I developed PTSD. We couldn’t even get a second phone line for the ward. AND THEY PARTIED???? #DowningStreetParties pic.twitter.com/leNfJAE8nb

Couples who did not live together celebrated birthdays and anniversaries apart, while others stockpiled food supplies for vulnerable relatives.

Doctors and nurses who worked on the frontline have also shared their experiences.

One medic is pictured in full PPE noting that it had to be “rationed” among staff and patients.

She said she spent nine weeks away from home and has since developed post-traumatic stress disorder.

One woman posted an image of her and her newborn son in neonatal intensive care, claiming her husband was unable to visit them due to strict COVID hospital rules.

Lidl has claimed to be the fastest-growing bricks and mortar retailer in the UK following bumper Christmas sales.The British arm of German discount supermarket chain said sales rose 2.6% in the four weeks ending 26 December. Like rival Aldi on Monday, it said it had benefited from shoppers switching from other grocers.However, also like Aldi, it refused to reveal data on whether its growth had been achieved at stores already […]