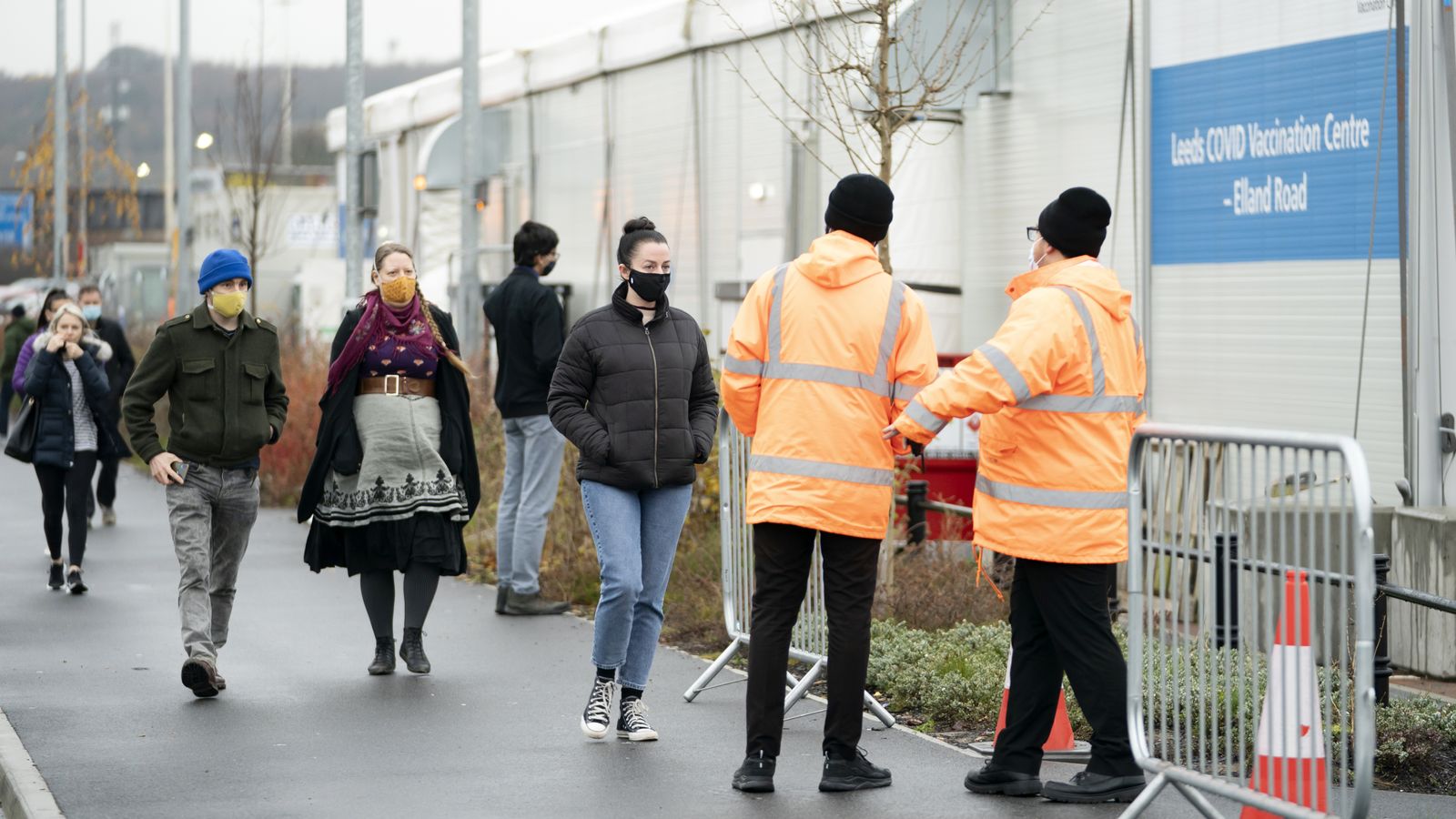 Boris Johnson has said “up to 90%” of people currently in intensive care with COVID-19 have not had their booster jab as he urged the nation to take up the offer.

Speaking to broadcasters, the prime minister said there are 2.4 million eligible double-jabbed people yet to take up the offer of a booster and that “the overwhelming majority” of those in a serious condition in hospital with COVID fall into this category.

“I’m sorry to say this but the overwhelming majority of people who are currently ending up in intensive care in our hospitals are people who are not boosted,” the PM said.

“I’ve talked to doctors who say the numbers are running up to 90% of people in intensive care, who are not boosted.

“If you’re not vaccinated, you’re eight times more likely to get into hospital altogether.

“So it’s a great thing to do. It’s very, very important. Get boosted for yourself, and enjoy New Year sensibly and cautiously.”

New research from the Intensive Care National Audit and Research Centre shows most people in intensive care in London who had COVID last month had not been vaccinated.

The PM added that his government are able to proceed as is with no new restrictions before 2022 due to the success of the vaccination programme and the “huge proportion of the British public” which had been vaccinated.

“That is allowing us to go ahead with New Year in the cautious way that we are,” he said.

But the prime minister did acknowledge the rising number of coronavirus infections and hospitalisations.

“The Omicron variant continues to cause real problems. You are seeing cases rising in hospitals,” he told reporters.

“But it is obviously milder than the Delta variant and we are able to proceed in the way that we are.”

Earlier this week, Health Secretary Sajid Javid confirmed there will be no more restrictions implemented in England ahead of the New Year, meaning New Year’s Eve parties can go ahead as planned.

This is despite record COVID infection numbers across the UK in recent days, with rates consistently above 90,000 over the Christmas period.

Mr Javid did not rule out the possibility of any further restrictions being introduced in January, but the other devolved nations have already introduced more measures.

In Scotland, gathering limits came into force on Boxing Day and in Wales, nightclubs closed after Christmas and the rule of six was imposed in hospitality settings.

Scottish First Minister Nicola Sturgeon is expected to update parliament later today on COVID-19, though it is unclear if more restrictions will be brought in.

Today, the NHS has launched a fresh booster jab drive in an effort to protect more people from the rapid spread of the COVID-19 Omicron variant.

Another 650,000 text messages and 50,000 letters will be sent in the coming days to those people who are yet to get their third vaccine dose, asking them to have a “jabby new year”.

Millions were contacted earlier in the week with a similar message, encouraging people to book their boosters as soon as possible.

Another 244,078 vaccinations were given out on Monday, including 209,626 boosters – the second-highest total for a bank holiday.

Some 51 million people in the UK have had at least the first dose of a vaccine, while more than 32 million have been given a third jab.

An unusually warm spell in what is usually the coldest state in the United States has seen temperature records broken.Experts say the mercury in some parts of Alaska was 11C (20F) higher than ever before for the time of year. Daytime temperatures have soared past 15C (60F) when there would normally be intensely bitter cold and light, fluffy snow.At the island community of Kodiak, the air temperature hit 19.4°C (67F) […]