Omicron’s rate of growth could make PCR testing ‘meaningless’ – is it time for a rethink?

Last April, the government set a target of 100,000 PCR tests for COVID each day. At the time, it seemed incredibly ambitious.

Today, the UK Health Security Agency (UKHSA) says it has the capacity for 815,000 tests a day.

It’s a mind-bogglingly big number, but the current speed of growth of the Omicron variant is leaving some public health experts saying it’s time to re-think using PCR testing to keep track of the outbreak in the community.

Last night, in a now-deleted tweet, one of the UKHSA’s experts pointed out that the doubling time of Omicron means that cases will soon exceed the capacity of the PCR testing network.

This afternoon, the latest update on Omicron suggests that doubling time may even be a bit faster than we thought – less than two days and in some regions as little as 1.5 days.

With growth rates like that, other experts have pointed out the time it takes for a PCR test to be taken, processed and the result returned makes them meaningless.

“You have to question why we’re still running PCR tests,” said Professor Alan McNally at the University of Birmingham, who helped set up the first government Lighthouse Lab.

“It’s taking longer for a PCR result to come back than it’s currently taking for the epidemic to double,” he added.

The system for testing for COVID in the community could be improved, he argued, by more widespread lateral flow testing.

Right now, the problem with that is that people don’t have to report a positive (or negative) result. But that could be overcome by asking people with symptoms to have a “confirmed” lateral flow test carried out at a testing centre.

A move away from community testing

But could moving away from community PCR testing leave us unable to keep track of the outbreak? Not necessarily.

Surveillance testing like the ONS Infection Survey and the REACT-2 study give the highest quality assessment of what’s really going on. Also, around periods like Christmas, when people want to make sure they’re not infected before seeing loved ones, testing rates go up – suggesting an increase in cases that might not really be there.

A move away from PCR testing in the community could free up excess capacity in hospitals which, in the coming weeks, are going to need all the help they can get, argued McNally.

Small hospital labs can easily be overwhelmed by COVID testing demand and cases in hospital look very likely to rise in the coming weeks.

Why? Well, some of the first evidence from the UK emerged today showing little difference in the rates of hospitalisation between people infected with Omicron and those infected with Delta. Good news for those worried that Omicron might be more severe, but not for those suggesting that it might be milder.

A separate study, also from Imperial, found that protection against hospitalisation from Omicron by boosters was good – up to 85%.

But not as good as two vaccine doses give you against hospitalisation with Delta which is about 95%. That small difference could mean a huge increase in the number of people at risk of hospitalisation and death from Omicron, especially if growth continues as it has been.

Doctors say extra PCR testing capacity in hospitals could be needed, but any suggestion that we give up on testing altogether either in hospitals or the community is dangerous.

“What we would be saying is that we’re not going to try and protect people who’ve had transplants, people who are taking immunosuppressive therapy, people who for a whole host of reasons need to be protected because they’re clinically extremely vulnerable… I would have very strong ethical problems with that,” said Charlotte Summers, an intensive care consultant and professor at the University of Cambridge. 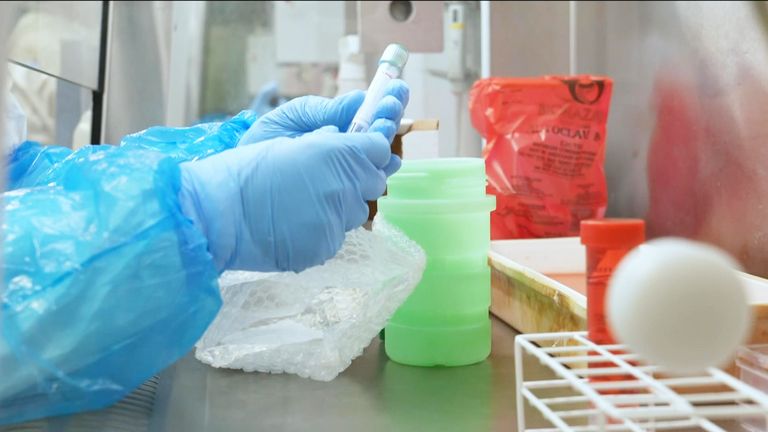 It’s dangerously close to the idea of “letting COVID rip”, she said. “We should do absolutely everything we can to never reach that point.”

The UKHSA says there is plenty of PCR testing capacity.

“We continuously review the size of the laboratory network to ensure that we have the most flexible and effective system and model our approach based on recent demand forecasts,” it told Sky News in a statement.

A spokesperson pointed out there is currently huge excess capacity and that tests were available to anyone who needs one.

But the Omicron variant is currently spreading so fast it will test the flexibility of any public health system.

‘They have kind of hung us all out to dry’: Businesses frustrated at lack of support amid Omicron wave

In Bristol, the last full working Friday before Christmas didn’t feel like it.A day informally reserved for sneaky shopping, long-lunches and perhaps a stagger home still wearing a party hat looked more like a Sunday. Restaurants and bars that have been banking on December trade found themselves wondering where the next customer was coming from, and frustrated at the government messaging that got them here.Public health warnings have caused consumer […]