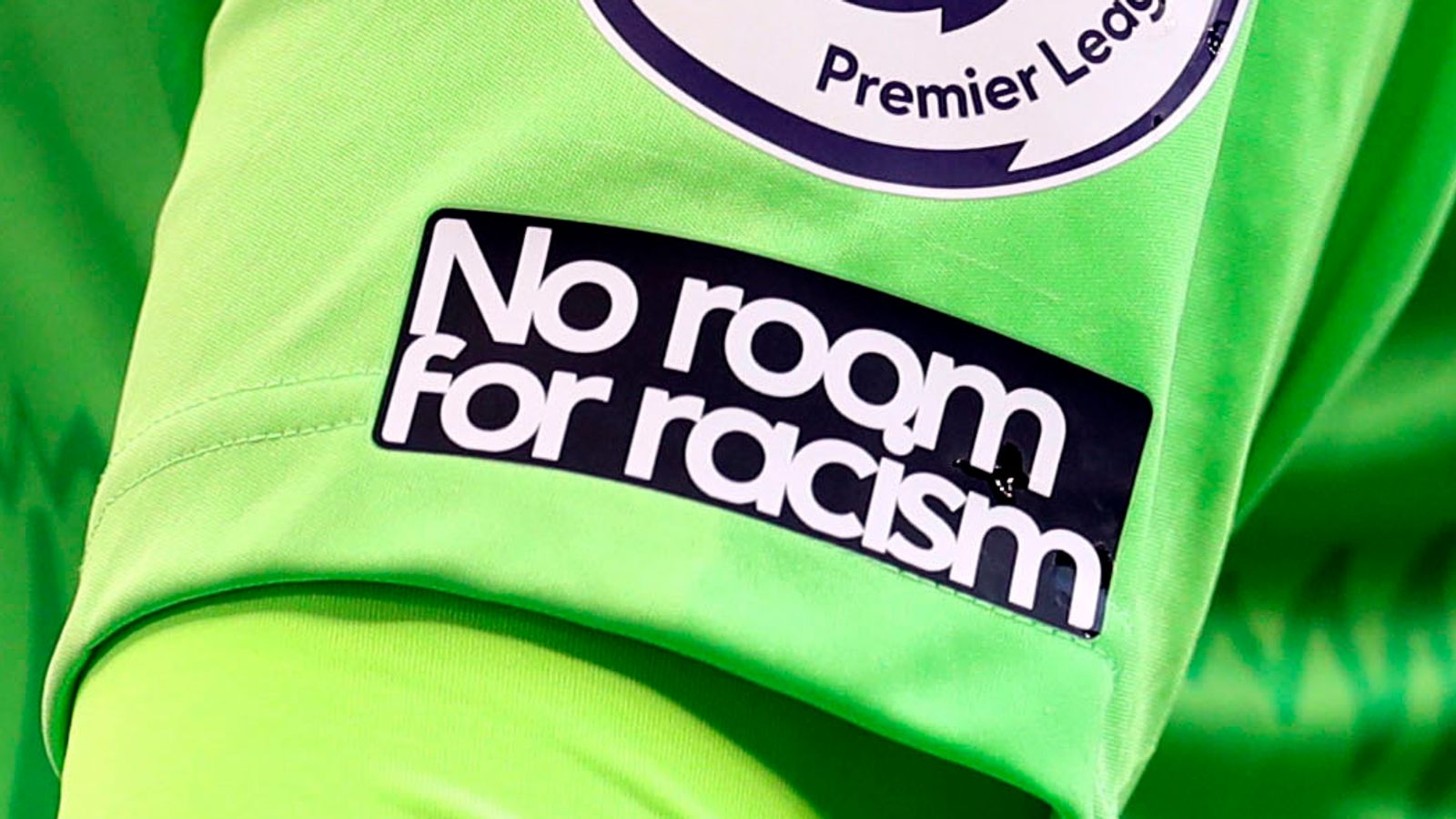 Almost two-thirds – or 62% – of football fans are concerned they will witness a player being targeted by racist abuse, according to a poll by Sky Sports News and YouGov.

The poll of 1,200 British football fans planning to attend a game this season showed that 32% are fairly concerned, and 30% are very concerned about a player potentially receiving racist abuse at a game.

A survey of more than 500 ethnically diverse football fans also found that almost three-quarters (73%) of those planning to attend a match this season expressed concern about experiencing racist abuse themselves at a stadium.

Some 34% said they are very concerned, with 39% stating they are fairly concerned.

Most black supporters (92%) are concerned about seeing a player racially abused at a game this season, while 90% of fans from an Indian background say they fear seeing another supporter being racially abused.

Burnley captain Ben Mee, who was praised last season for condemning a White Lives Matter banner flown over his team’s game with Manchester City last season, reacted to the survey results by saying the fight against racism continues.

“We are trying to do all we can to help with that and get those numbers down, and to support the fight against racism.

“We want those numbers to be lower and we want people to feel comfortable whenever they enter a football stadium.”

Kick It Out chief executive Tony Burnett is not surprised fans are concerned about racist abuse directed at players but is cautiously optimistic about the future.

“We see surveys like this quite frequently and we see the stats behind surveys around discrimination on a daily and weekly basis, so it’s not surprising,” he told Sky Sports News.

“But I’m not overly pessimistic about it either, because I think I see the kind of shoots of progress in football when it comes to inclusion and inclusive behaviours in and around football. And I see some real positive progress.

“I think this is a moment in time. It’s not a great set of stats, but I’m looking forward to seeing the next set in a couple of years’ time showing that we’ve made massive progress and people feel a bigger sense of belonging around being in the game.”

“I think everyone knows they can always report something to the police. On a matchday, you’ll always have a police officer or numerous officers on the ground,” he told Sky Sports News.

“And if it’s in the West Midlands, within a football ground, it will always come back to myself to investigate. We always encourage victims to report it as soon as possible really, so it gives us the best opportunity to collect that evidence and identify the offender.”

More than two-fifths of respondents (41%) said they had heard racist language at stadiums themselves, with 14% admitting to using such language themselves.

A majority of respondents (60%) also said current punishments for racism in stadiums are not harsh enough, with 18% saying that they are about right.

Former England goalkeeper David James insisted there must be tough sanctions and a zero-tolerance approach to all forms of abuse at grounds.

He told Sky Sports News: “Football stadiums are a place where people should come and enjoy a game of football and not be subject to racist comments, sexist comments, or homophobic comments.

“They should be a place where people feel free, and I think the maximum penalty, whatever the law has [at its disposal] should be used.”

Head of UK football policing Mark Roberts said reduced security at many grounds may have contributed to fears of racism and hate at football matches.

“I think what we’ve seen over the last few years is a reduction of police in stadiums.

“Now, this isn’t a bid for us to get officers in the stadiums for the sake of it, but the best sanction and the best deterrent for someone engaged in racism in a stadium is to see immediate action, that person arrested and then suffer(ing) a sanction at the court,” he told Sky Sports News.

“What we’ve seen is more than half of games now throughout the leagues are police-free. We know some clubs are struggling to resource stewards as we move into the season.

“So we need that focus, when people commit these offences, those around them see an immediate response, immediate reaction, and a hefty sanction at court to deter others from engaging in that sort of behaviour.”

A quarter (25%) of ethnically diverse supporters said they have personally received racist abuse on social media when discussing football, and 47% have witnessed a player receiving abuse online. Nearly half (46%) think racism on social media has increased the level of similar abuse in stadiums.

A third (33%) of those who attend games have personally experienced racism at a match, with this figure rising to 43% when looking at fans who go to a stadium at least once a year.

Of those who do not plan to attend a stadium this season, 13% say the main reason is their concern over witnessing or receiving racism, with sentiment highest among black football supporters (23%).

“We can’t have a system or a mechanism in place whereby people are feeling so fearful of going to enjoy a sport that they actually feel they have to stay at home because they’re not sure how to report abhorrent behaviour, they’re not sure that action will be taken,” she told Sky Sports News.

“We need to create a culture and a mechanism by which people are aware that reporting leads to action, and that action means people who are behaving in an inappropriate way will not be welcome in the stadium, will not be able to watch the football match.

“And actually, individuals who are behaving in a proper, appropriate, welcoming way are the ones that we want in the stadium supporting their relevant teams.”

In response to the survey results Culture Secretary Oliver Dowden said: “The Premier League has rightly introduced tough new lifetime bans for anyone found guilty of discrimination and the police already have a range of powers to identify and pursue those who try to use anonymity to spout hatred.

“We will continue to work closely with the police and football authorities to clamp down on deplorable racist behaviour wherever it might take place – be that in stadiums or on social media.

“Our Online Harms Bill will also make it even tougher for offenders to abuse others and hold social media firms to account if they fail to act.”

Sky Sports is committed to making skysports.com and our channels on social media platforms a place for comment and debate that is free of abuse, hate and profanity.

If you see a reply to Sky Sports posts and/or content with an expression of hate on the basis of race, sex, colour, gender, nationality, ethnicity, disability, religion, sexuality, age or class, please copy the URL to the hateful post and screengrab it and email us here.

Kick It Out reporting racism

Online Reporting Form | Kick It Out

Kick It Out is football’s equality and inclusion organisation – working throughout the football, educational and community sectors to challenge discrimination, encourage inclusive practices and campaign for positive change.

The flag bearers for the ParalympicsGB team have been revealed as Ellie Simmonds OBE and John Stubbs MBE.The pair will carry the Union Flag at the opening ceremony in Tokyo on Tuesday. Both are veteran Paralympians, with 10 medals between them. Image: Simmonds will be hoping to add to her already impressive haul of eight Paralympic medals Swimmer Simmonds, 26, took home two medals in her debut at Beijing 2008, […]