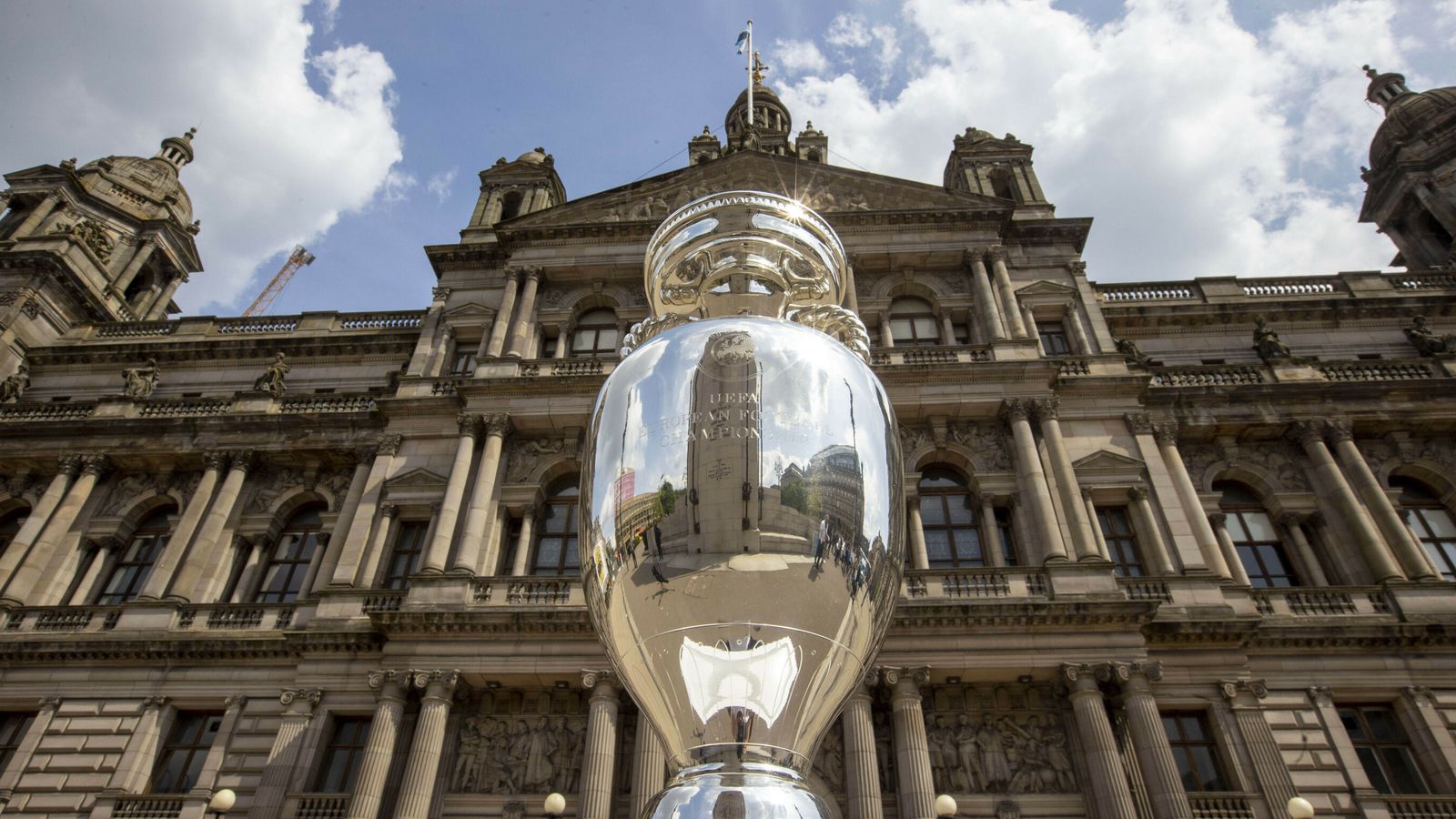 Scotland’s decision not to require fans to show vaccine passports or test results on entry to Euro 2020 matches has sparked criticism it is lagging behind England on COVID safety measures.

Fans attending matches at Hampden Park will not need proof of a negative COVID test to gain entry, in contrast to Wembley where supporters now need to show evidence they have been fully vaccinated or had a negative test result.

Similarly, there is no mandatory test requirement for crowds due to attend a Euro 2020 fanzone in the centre of Glasgow.

It has led to increased criticism of the Scottish government over coronavirus precautions around the tournament.

Hampden Park will host four games during Euro 2020, including Scotland’s opener against the Czech Republic on Monday.

They will be socially-distanced and told to wear a face mask, but entry requirements do not include a COVID-19 test.

Across the city, at Glasgow Green, up to 3,000 fans at a time will gather in an outdoor Euro 2020 fanzone to watch games on big-screen TVs.

The Scottish government has encouraged those attending to take free twice-weekly lateral flow tests, but proof of a negative test result is not a requirement for entry.

Alex Cole-Hamilton, health spokesperson for the Scottish Liberal Democrats, told Sky News: “This is the first time in decades that Scotland’s men’s team has qualified for a major international competition, so I want the fanzone to go ahead if it can be conducted in a safe way.

“That means verifying the COVID status of every attendee before admission as they have done at lots of other mass events in other parts of the UK, including the FA cup final.

“In the week that parents learned that they can’t attend outdoor nursery graduation ceremonies, and when adult respite services and soft play centres remain shut, the government are sending out the worst kind of mixed messages here.”

“With Glasgow having just come out the toughest restrictions in the UK, not ensuring mandatory testing is in place at both Hampden and Glasgow Green is misguided and must be looked at again,” he said.

The Scottish government has said it would “review and modify” its plans accordingly if the prevalence of the virus created concerns around safety.

Scotland’s Health Secretary Humza Yousaf told the Scottish parliament on Tuesday: “The situation with the virus will be continually reviewed in the run-up to and during the tournament, with account being taken of the latest scientific and clinical advice and local information that we get on the ground.”

The Glasgow fanzone, and its ability to sell alcohol, has also prompted criticism from the hospitality industry in the city, where pub and restaurant owners have faced severe restrictions on alcohol sales.

A Scottish government spokesperson said: “Decisions about testing and other arrangements for the fanzone and Euro 2020 matches at Hampden Park are taken jointly by the Scottish Government, Glasgow Life, the Scottish Football Association, Public Health Scotland and other partners.

“Robust safety measures will be in place at the events including physical distancing, stewarding, cleaning and contact tracing provisions.

“Everyone attending will also be asked to take up the offer of twice weekly rapid lateral flow testing.”

A British 'flying taxi' company set up by the founder of OVO Energy is in advanced talks about a $2bn 'blank cheque' merger that will see another major British technology company heading for the US public markets.Sky News can exclusively reveal that Vertical Aerospace, which was established by Stephen Fitzpatrick five years ago, is close to sealing a deal with Broadstone Acquisition Corp that will see it become a publicly […]