Global music star Ed Sheeran has thrown his support behind an England song recorded by a diehard football fan and rapper ahead of the Euro 2020 tournament.

T8PES, who releases This Is Football across streaming services on Friday 4 June 2021, counts the best-selling singer-songwriter amongst his friends and fans.

Sheeran said, “I love this England tune from my old mate T8PES. England’s gonna bring it home – make sure you check the song out!”

Described as a ‘people’s anthem’ by Birmingham artist, youth worker and Aston Villa fan Jimmy Davis, who records and performs under the moniker T8PES, the track is a rousing call to arms for fans to get behind Gareth Southgate and team progress through the major sporting event.

Unlike previous international tournaments, the FA has not endorsed an official single ahead of the delayed championships as yet.

As bookies slashed the odds of England winning the tournament – moved to June 2021 following the global pandemic – to clear favourites, the song comes at the perfect moment to rally support following a difficult year for sports and music fans alike.

T8PES said: “The last 14 months have been a rollercoaster for musicians, footballers and their fans. It’s a dream to be combining two of my biggest passions – I’m putting This Is Football out there for supporters of all teams to unite under one song and help cheer England all the way to the final.”

“The great England songs of the past like Three Lions and Vindaloo were not official so I’m hoping the country takes this tune to their hearts as we all get behind the team.

“After the year we have all had, the Euros could be a joyous explosion and This Is Football will be part of it.”

Jimmy said: “This is 2021 and women’s football is thankfully now part of our culture so it would have been unthinkable to release a song with just blokes on it. Zoe’s vocals give the track a fantastic feel of euphoria which is hopefully what we will all be feeling when England go all the way!”

The track’s cross-over appeal could see it rocket up the charts as England progresses through the tournament which starts on June 11.

Villa-supporting T8PES has penned football-based lyrics and freestyles about the ups and downs of the beautiful game in his weekly Premier League Wrap Up which led to MUTV asking him to perform on the channel.

And whilst his great grandparents hailed from County Mayo in Ireland, T8PES is a diehard England fan. The 39-year-old has watched every England game in European and world tournaments since the age of 9 when he was holidaying in Italy during Italia ‘90.

“I’ve wanted to write a football song for as long as I can remember. I’ve tried before but never quite hit the mark. I even remixed one of my songs into a footy-related track but it just didn’t really work.

“The fact that I’ve managed to nail it and write an England song this time around makes it even more special.”

Jimmy’s personal story is one of triumph over adversity overcoming drug addiction, petty crime and homelessness to become a music star and a mentor to a generation of youngsters in his native Birmingham as a youth worker.

His career highlights over the last two decades include performing with Ed Sheeran at Glastonbury in a long term collaboration which the global star has credited with contributing to his spectacular success.

This Is Football is out across all streaming platforms from 0001 Friday 4 June 2021. 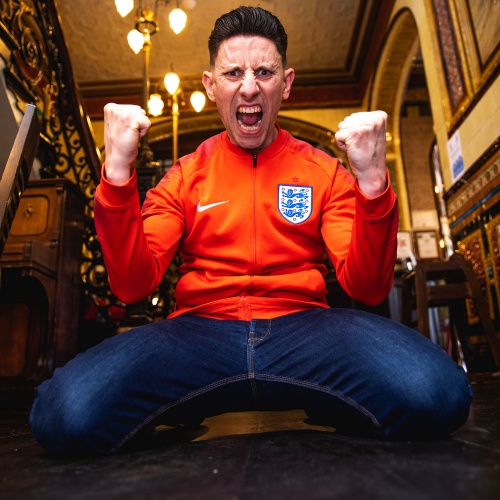 The police officer accused of murdering ex-footballer Dalian Atkinson has told a court he was "terrified" he was going to die during the encounter.Benjamin Monk is accused of using unlawful and unreasonable force when he fired a Taser at the former Aston Villa star for 33 seconds before kicking him in the head. Monk, a constable with West Mercia Police, has denied murder and manslaughter and gave evidence for the […]