Steven Van Zandt: Me and Bruce Springsteen were misfits obsessed with rock and roll

Steven Van Zandt and Bruce Springsteen bonded as they were both “misfits” who saw “rock and roll as a religion”.

The 70-year-old guitarist has served as Springsteen’s right-hand man in the E Street Band since 1975 but they have been friends since the late 60s and Steven says they grew close over their obsession with music, quickly realising they were kindred spirits.

Speaking on the ‘Rockonteurs’ podcast, the ‘Soulfire’ rocker said: “He had a local band and I had a local band and keep in mind there were no bands in America on February 8th 1964, February 9th 1964 The Beatles play a variety show [Ed Sullivan] and February 10th 1964 everyone had a band in their garage! About a dozen of us managed to get out of the garage and we became the circuit and Bruce had one band and I had another. He was a completely different person then, he was very quiet, never spoke, had very long hair and I think grungy would be the best description, and we just became very good friends because we were the only people that were really 100% into rock and roll as a religion, there was no plan b for us we were just complete freaks and misfits that had no place in society really.”

Steven can vividly remember the impact The Fab Four had on him when he was a teenager in the 1960s and the band also introduced him to the music of 50s rock ‘n’ roll icons like Chuck Berry and Little Richard.

Speaking to Gary Kemp and Guy Pratt on their podcast, he said: “I think it was more special [discovering The Beatles] for us [in the US] than it was for you … I’m a 60s guy so I missed the 50s and early 60s, but I started buying some singles, and they were reintroducing America to their own music. I’d never heard of Little Richard or Chuck Berry… why would I? They had gone by the time we were grown up!”

The Rockonteurs podcast is available every Sunday from Rockonteurs.com and multiple podcast providers. 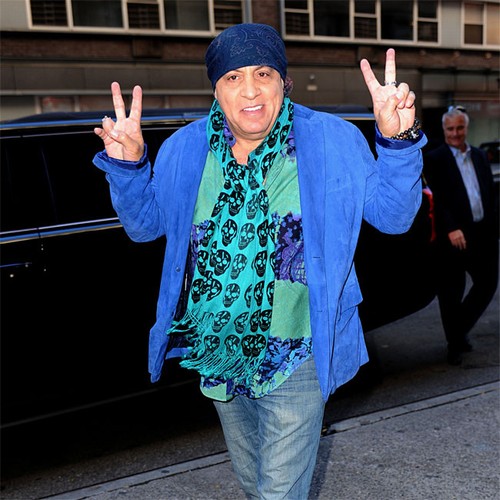 Sainsbury's has been forced to apologise after customers in Cornwall complained it had used a photo of a scone laden with cream - with the jam on top.The image of the fruit scone featured on an in-store advert for Sainsbury's bakery section at a branch in Truro. But local customers were outraged and decided to complain after they noticed that it was topped with a layer of cream first, then […]